Building Suspense for Your Character: Hermann Hesse Defines His Steppenwolf

One of the great challenges in literature is to produce genuine interest in a supposedly madman character without hamfisting his madness, or jamming it down the reader's throat about how nuts he is.

What makes him crazy? What tortures him? The writer quickly runs the risk of creating a whiny character who is not authentically mad, or genuinely wild in his thoughts and actions, enough to justify throwing him into wacky situations and having him commit even wackier atrocities or misdeeds.

So, in Hermann Hesse's Steppenwolf, we must ask, Why is this "For Madmen Only" manuscript left 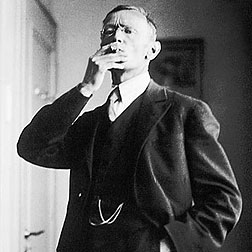 behind by Harry Haller worth reading about, anyway? Hesse builds us up by framing the manuscript.

In the preface we learn the nephew of a renter is publishing Haller's records because he's disappeared and left them behind, and the nephew believes maybe somebody could make some use of them or find interest in them. He admits that if he hadn't met the Steppenwolf himself, and greatly distrusted him at first, he wouldn't have found much interest in the pages.

A madman must have peculiarities that are at once not too overt, yet believable enough to fall within the parameters of so-called skillful writing. Or, in other words, the author isn't using the excuse of "look how crazy my lone wolf character is" for writing in random, off-sequence events without proper framing and buildup.


The only request he had made was that his arrival should not be notified to the police, as in his poor state of health he found these formalities and the standing about in official waiting rooms more than he could tolerate. I remember very well how this surprised me and how I warned my aunt against giving in to his stipulation. This fear of the police seemed to me to agree only too well with the mysterious and alien air the man had and struck me as suspicious (6).

Yet, the aunt agrees to the terms. But the key is that Hesse has her skillfully agree without ramming it down our throats like a screenwriter for horror films would do just to have a nice family board with a psychopath. We don't want to feel like the writer's twisting his character's arm.


I explained to my aunt that she ought not on any account to put herself in this equivocal and in any case rather peculiar position for a complete stranger; it might well turn out to have very unpleasant consequences for her. But it then came out that my aunt had already granted his request, and, indeed, had let herself be altogether captivated and charmed by the strange gentleman. For she never took a lodger with whom she did not contrive to stand in some human, friendly, and as it were auntlike or, rather, motherly relation; and many a one has made full use of this weakness of hers (6).

Basically, this isn't the first time she's granted a strange lodger's request. Not only was she charmed by him, but it's in her personal history to create a warm relation with the lodger. So if it seems unlikely that she would rent to the mysterious Harry Haller, Hesse quite expertly plugs that hole with reasonable justification. She's done it before, she'll do it again.

The suspense is created. Who is this Haller fellow? We'll never hear from the nephew again, as the rest of the book is Steppenwolf's manuscript, so Hesse stacks up the outside perceptions of his star character before turning the reader over to the bleak and hopeful shades of Haller's mind.


Two days after this the stranger's luggage--his name was Harry Haller--was brought in by a porter. He had a very fine leather trunk, which made a good impression on me, and a big flat cabin trunk that showed signs of having traversed far--at least it was plastered with labels of hotels and travel agencies of various countries, some overseas (7-8).

It becomes humorous how the nephew begins reading signs among all of Haller's belongings and facial expressions. He is worried about his aunt, after all. So maybe he's justified sneaking into Haller's rooms when he's out and doing a little snooping.

Hesse is also taking advantage of having a hyper-alert young man scout our protagonist and hand more unique details to the reader.

The nephew notices the Steppenwolf sitting near him at a lecture of a celebrated historian who was to speak in a school auditorium. When the lecturer says a few flattering things about the audience by way of introduction, and thanks them for coming in such numbers, we see the piercing quality of Harry Haller's disdain:


...the Steppenwolf threw me a quick look, a look which criticized both the words and the speaker of them--an unforgettable and frightful look which spoke volumes! It was a look that did not simply criticize the lecturer, annihilating the famous man with its delicate but crushing irony. That was the least of it. It was more sad than ironical; it was indeed utterly and hopelessly sad; it conveyed a quiet despair, born partly of conviction, partly of a mode of thought which had become habitual with him. This despair of his not only unmasked the conceited lecturer and dismissed with its irony the matter at hand, the expectant attitude of the public, the somewhat presumptuous title under which the lecture was announced--no, the Steppenwolf's look pierced our whole epoch, its whole overwrought activity, the whole surge and strife, the whole vanity, the whole superficial play of a shallow, opinionated intellectuality. And alas! the look went still deeper, went far below the faults, defects and hopelessness of our time, our intellect, our culture alone. It went right to the heart of all humanity, it bespoke eloquently in a single second the whole despair of a thinker, of one who knew the full worth and meaning of man's life (9).

Notice how fine Hesse picks his way through the nephew's awe of Steppenwolf. With less skill, the reader might be turned off by thinking we're supposed to believe Haller to be some sort of intellectual superman, so he finely combs the minute details of the look, analyzes their parts, and produces a convincing, moving portrait of a man who really can pop the bubble of an entire generation with one sad, sour look.

And with that, the reader might be thinking that this Haller would truly be a difficult character to spend much time with. Finally, we get an analysis of the Steppenwolf that also delicately portends to the metaphysical occurrences that happen to him:


...I suspected that the man was ailing, ailing in the spirit in some way, or in his temperament or character, and I shrank from him with the instinct of the healthy.... In course of time I was more and more conscious, too, that this affliction was not due to any defects of nature, but rather to a profusion of gifts and powers which had not attained to harmony (10).

Instinct of the healthy. What a fine phrase that throws our perception of Haller into some murky, opposite corner of what is the instinct of unhealthy. This cultivates a deeper distrust and dis-ease of Harry Haller by locating his peculiarity to something worse than just strange, as an affliction seated somewhere you can't quite locate, between body, mind, and spirit. And yet, the defect, the nephew suspects, is due to a disharmony of something fantastic, maybe borderline mystical.