Plight of the Modern Man in Castaway by James Gould Cozzens

By the end of James Gould Cozzens' Castaway, we see the plight of the modern Western man in all his solitude, surrounded by a mastered material abundance and heaps of time with which to enjoy it, yet the howling void within goes again disconsolate. In this way, the book might be thought of as a parable, but closer to approaching allegory.

It is also, in some ways, a retelling of Robinson Crusoe. There is an ominous footprint, after all, and it is never considered a signifier of hope or a mark from a potential friend. 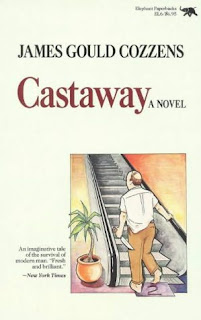 Castaway was first published in 1934. The material satisfaction one might find today far surpasses what was available then, but the lesson is the same.

Opening the book, the reader finds a man only known as Mr. Lecky prowling the basement of a department store that we learn has nine floors loaded with everything any shopping mall in a major city would sell. But why is he there, and especially, why is he alone? No workers, no shoppers, the place is closed, and Mr. Lecky never once seriously considers leaving the place. We can only deduce something catastrophic has happened in the outside world, and there are not many survivors.

By the time Mr. Lecky has secured himself, has assured himself he's finally alone in the gigantic building, and all nine floors are of his kingdom, under his lordship, he finds himself miserable. The familiar (the department store) has become the unfamiliar (the department store unmanned, idle, eerie), and has become once again, with the help of a sleek apartment floor model with a completely furnished living room, bedroom, and dining room, familiar (as much as home away from home can be).

In his new living room, Lecky reads a book, "...doggedly, paragraph by paragraph, page by page" (105), because of the sketch of a naked woman on the cover. He assumes there must be something worth reading inside. With all his immediate needs satisfied, he figures he might really enjoy a book. He quickly tires of it. On the table are two bottles of witch hazel, which he'd heard a person could drink like alcohol, possibly.


Outside it was as good as dark, and having got up and seen it, he came back; but he did not sit down or take his book again. He stood bemused, rubbing his chin. Finally he looked at the two bottles on the bureau (105).

And then after having tried a few sips of witch hazel:


It caused him nothing but a feeling of warmth in his stomach, so after a while, he would seem justified in drinking more, if he wished to, hoping to enjoy greater warmth (105).

That was the first lesson I learned in Microeconomics. If one candy bar brings us happiness, the instructor shouted out to us, then by that logic, two candy bars bring us even more happiness. And a third triples the happiness. Until eventually you puke (but he didn't mention that).

Never mind that Mr. Lecky has access to a store of shelves filled with books. Rows and rows of knowledge at his disposal. He could also reflect on what has happened, on what has marooned him in the department store. He could meditate. Develop a longer term plan. He could write about his experience. But quickly he becomes discontented when he's finished the several-days' tasks of securing his fortress.

Every possible good one could need for subsistence, and nearly every other invention to satisfy desires beyond what one needs to live is available, uncontested, and free to Mr. Lecky, yet after he secures his surroundings and hauls everything he'll require for the next few weeks to his stronghold, we see a man discomforted by his own self, by the silence, and by the lack of something as simple as needing a practical chore to do with his hands.

Cozzens leads us along with a slow, considerate prose style. Every consideration of Mr. Lecky is taken into account. Which way he turns, which way he looks, at what does he look, and all of his plans to fortify a section of the mall to secure himself should there prove to be somebody else lurking in one of the nine mega floors. This pushes the larger, circumstantial why and what-for questions further out of range, out of the way.

He learns how to use a gun, but only after a tedious run-through of every gun in the sporting goods section, where he tries to match the ammo with the circumference of the barrel. The reader is kept very close to Mr. Lecky's physical actions, and that effect ties our brains to the must-do, must-have survival mode of a man hunkering down like he's on a deserted island, except with every modern day material good and delight available.


Mr. Lecky had meant only to knock the cover off; but his sharp blow was inaccurate. The neck smashed, strewing glass splinters, syrup, and a few of the figs in a mess on counter and floor. Mr. Lecky was annoyed. Furthermore, he feared that bits of glass might have embedded themselves in the remaining fruit. Setting down his gun, he made a meticulous examination, for he believed that swallowing glass would surely kill him. Partly satisfied that he was not about to eat any, he began to pick the figs out, cautiously looking over each before thrusting it in his mouth. Once or twice the grating of the fine seeds on his teeth made him pause; but hunger urged him on. Setting down the empty bottle, he could think of nothing to fetch and eat next but a second ham (35).


The attention to detail, notably the panicked crunching of the fine seeds on his teeth, is a brilliant exhibit of how careful a man would be who knows there is no doctor on call or nearby, yet can barely contain his hunger.

Cozzens keeps the reader mired in each action, the smashing of a bottle, the taste of the food, the urge of the stomach, the phantom sound somewhere far off in the store. Mr. Lecky's senses might not be the greatest, but that's all he's got. We don't penetrate his mind deeply enough to get a reading on his beliefs or his past with anything more than a superficial glance or plain justification.

This style lends credibility to the earnestness of the narrative. It also invites the reader to chide Mr. Lecky on apparent missteps. It's very easy for the reader to get into the habit of thinking, "Well, you fool, why don't you do this, or that?" Or, "If I were in this situation, I'd certainly do this or that first." And Mr. Lecky's decisions and actions become shocking at points, which turns into reflection for the reader.

For writers who like to over explain their concept, the situation their character finds himself in, and what's at stake, Cozzens' Castaway is a lean example of how suspenseful a literary work can be by dialing back the speculation and sticking close to home to the character's actions. But that has to be done correctly, of course.

Cozzens has entered the reality of his Mr. Lecky with his own consciousness, and the decisions the character makes feels organic and justified by his short conclusions of why he must do one thing, like build a shelter, or another, like secure a lavatory. For Mr. Lecky's faults feel like his own, as does his miserable listlessness by the end.