Maybe the most striking aspect of Hamdy el-Gazzar's novel, Black Magic is the missed opportunity to delve deeper into the quiet, but internally unsettling life of a young man living in an apartment above the shop of an old undertaker. 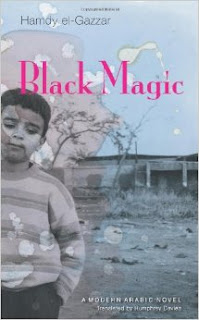 The first twenty pages detail the aged undertaker sewing shrouds for the bodies he will prepare for their graves each week. Not a better chance for an extended metaphor, yet the power set up by el-Gazzar gets squandered by the far too common insights and revelations of Nasir, the protagonist, agonizing over how he feels having struck up an intimate love affair with a women twice his age.

In my last review, we saw how Hermann Hesse's Steppenwolf navigated the complex circuits of a very uniquely miserable character. In Black Magic, the legwork is not done well enough, or extensively enough to convince the reader that Nasir has the same quality of unique misery that is worthy to fill up dozens of pages. We're told, but we're not convinced:


...I'm like some great mystic saint, el-Hallaj for example--a person impossible to accept, rejected by his people, his family, his society. I object to nothing and I don't engage in dialog with the apparatus of authority or the high priests of thought or the men of letters, of the sciences, of the administration. I'm not necessarily some kind of obstreperous animal, or a bird that has separated itself from the flock; my deviancy consists in neither allowing myself to be provoked nor provoking others. In return, what is called society subjects me to amazing repression, over and above the normal censorship and taboos. I am suspended--that's all there is to it--far from things and human relations by a tacit decision to be insignificant, to not belong to any category or fit any niche (92).

El-Gazzar's passage--or the translation by Humphrey Davies of the passage--is not poorly written or boring, but it is one dimensional in the novel. It's too much like having a friend you consider a fairly normal chap with regular ups and downs in his life tell you how weird he is, and how he doesn't accept the norms of society, and society, or what is perceived and called society, doesn't accept him (and, would you believe it, even tries to strike him down).

There is very little in Black Magic to back up this statement, and when it's given to the reader, it's not convincing, because it doesn't light up previous passages and incidents, or lend a higher understanding to the pages that come before and after.

Throughout the novel, it is the camera that supposedly sees life in its truest, most basic form--which is a form not many of us wish to encounter. Nasir is called a great photographer but a terrible employee by his boss. He zooms in, often, on his target, as the rest of his team works to cover the function for which they were hired.

The camera captures something more severe each time Nasir uses it. The final, cataclysmic moment is when he steals a very close look at the sheikh reciting in a Sufi gathering. We suffer the following disenchantment:


In zooming in I got closer to his eyes and lips and flesh. What I saw terrified me. I repented my ugly act and removed my eye from the lens. I should have left an appropriate distance--a 'medium' or a 'total,' a general shot, distant or middle-ground.... Why can't you be satisfied with the sublime--the joyous, awe-inspiring sublime? Sublimity, the sublimity of your bewildering, mysterious, exceptional, unique voice, makes my soul shake with longing.... May the earth swallow anyone who seeks beauty here! Beauty is the blasphemy of the lover's love for the beloved. I have been touched, made sick, rendered diseased by this instrument that I know as well as I know the color of my fingernails and the evil of my innermost thoughts, this deranged camera, this wild beast that goes in close and strips away the mask, pulls back and reveals all, wallows in details, makes the blind see, shocks and humiliates, beautifies and lies and divests all of their clothes and their intentions... (176).


For Nasir, the camera strips bare what we're supposed to see, and what is really to be seen.

The least interesting developments in the book concern his ill-fated relationship with an older woman--a woman divorced, once a frequent adulteress, and then gone rusty (as Nasir says).

More than a couple pages littered with poetic prose about the transcendental wonders of passionate sex get in the way of other worthy characters that need more development, more room to act, such as Nasir's abusive male neighbor, Gum'a, who beats his sister every night. Or the old undertaker. Or the treacherous leader of his photography crew.

Fiction at its best should light up new pathways for thought, should turn inside out old ideas and inspire connections between life experience and knowledge. Fiction can be like a slow burning LSD that plumbs the mind and challenges the soul, without the dangers and immediacy of actually putting some of the real stuff on the tongue.

That is why books like Black Magic frustrate me. Not altogether poor or meager in content and insight, but much potential wasted to re-devour the same longing for physical intimacy coupled with the frustrations and confusion of maintaining a supposedly good thing with a lover. And again, it's the camera's work that becomes the catalyst for everything that's wrong with their relationship.

At el-Gazzar's most poetic and haunting, he nails the maddening dance of having fallen too far with someone he'd never meant to, and of the breathless uncertainty ahead. I suspect it would be even more profound if read in the original Arabic:


She will never let herself get trapped into going that extra distance. She draws borders with precision and has a clear, complete map of most things. In her heart is a huge little doll, a daughter who ate lots of hamburgers and pizza and toast and stuffed vegetables and lamb-and-rice in days when they lived in luxury in the Arab Gulf and who doesn't want to stay in Egypt; and in some other space, a young man, whom she now thinks of as a small, fragile shackle--she who believed that she had rid herself of all shackles. She also has a car that she loves. Once I suggested to her that she exchange it for a horse and a small wooden two-seater carriage so that she could progress with the beauty and stateliness of the old fiacre. She agreed, on condition that I be the horse and pull her carriage behind me. She thought I had excellent hooves and a strong back and that I would prove capable of withstanding the blows of the whip, which she would enjoy plying, albeit gently and softly--nevertheless the comparison shocked me ( 180).