Fortune Smiles (Sometimes In All the Wrong Places) by Adam Johnson

I found Adam Johnson's Fortune Smiles in a small library bookstore and bought it for one dollar. I thought I'd gotten a steal. A real boon for my library. I'd read the story "Nirvana" already and enjoyed its energy and seamless weaving in and out of personal crisis to the haunting possibilities of technology, to worshiping the blonde-haired, most famous suicide rock star of the 90s. 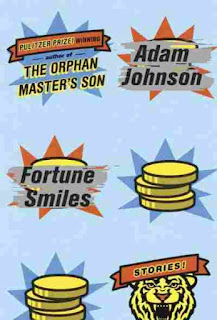 I tweeted an article probably from the NY Times praising Adam Johnson's book of short stories. Not even five minutes later Johnson's editor retweeted my tweet with what I felt had to be the same type of vibrating intensity of a jackrabbit springing across the road as soon as the headlights get just near enough.

It's difficult to sell books these days, and maybe it's always been that way, but it must be a kind of social media spree similar to how computer gamers use their trigger fingers and thumbs to blast candy or purple balls out of the air with a variety of ridiculous guns and cannons shooting lead, lasers, and lightning bolts.

The subject matter is so morbidly bombastic, I couldn't read the book with any seriousness. The lead story, "Nirvana" was great, at first, but became more gimmicky by the minute. Johnson's strength of interweaving disparate topics connected by depression, tragedy, and love is on display, but it cannot save the story collection. Even the memorable idea of the dead president hologram app is washed away by the ceaseless tides of vulgarity and provincial doom awash in the later stories.

"Interesting Facts" is my favorite story only because it sheds light into the author who keeps winning awards and literary fame, and the truthful details mixed with the fictional ones make for an engaging story, especially from the wife's point of view (ex: "Before my husband won a Pulitzer....")

Orphan Master's Son is a much more thorough, worthwhile book, but these so-called haunting stories (as Johnson's editor calls them in his letter to readers), are trying as hard as the stories submitted by myself and my fellow graduate students when we thought we had to choose the wackiest topics, the most violent situations, the most perverse sexuality, to clear new territory for our small writing selves in the workshops. Yet, I suspect most of us will get over that urge and fall into a more natural voice that transcends what we might have thought was edgy but turned out to be simplistic.

Yet, I am a pariah, it seems, when it comes to Fortune Smiles. Goodreads gives it just over 4 of 5 stars. Most of the reviewers fawn over Johnson's dark humor and absurdity. So he doesn't need my praise. He's won enough awards and grants to feel satisfied.
at 12:30 PM