Perfecting Space & Scene in The Spire, by William Golding

If you want to see exuberance of faith, built on shaky foundations, and watch it spiral out of control and threaten to bring down an entire community, then read carefully William Golding's The Spire. Dean Jocelin leads us through his vision of erecting a four-hundred foot spire atop his cathedral -- supposedly Golding based it off the Salisbury Cathedral. 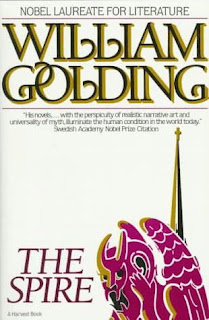 Jocelin has pushed his friends and fellow stewards of the church to their breaking points, and most have fallen out with him. His caretaker has deserted the cathedral, and his poor wife drifts clumsily back and forth, eyeing the master builder as he cusses and swears that the pillars of the cathedral will never hold such a spiral. The church is built on no foundations! he reminds the dean again and again. But the dean tells him to have faith. He prays about it, and he mentally wills the pillars to hold, even as they begin to bend:


His will began to burn fiercely and he thrust it into the four pillars, tamped it in with the pain of his neck and his head and his back, welcomed in some obscurity of feeling the wheels and flashes of light, and let them hurt his open eyes as much as they would. His fists were before him on the stall but he never noticed them.... At last, when he understood nothing else at all, he knew that the whole weight of the building was resting on his back (76).

In the midst of all the confusion and chaos, Golding gives the reader an omniscient narrator to pull him through the story, yet most of the time we're in the widely swinging emotions --from sheer happiness and goofy smiling and the raising of the chin in delight, as well as being visited with the warmth of a nearby angel, to anger, irritation with his colleagues, and being accosted by a host of demonic forces.

With the swirl of a character steeped in manic undulations of emotion, and bordering on madness, Golding does a fine job of containing that madness, and sometimes confusing thoughts of Dean Jocelin, by firmly grounding the reader in the church without physical foundation. He shows us many of the corridors, the deanery, the clerestory, the ambulatory, and so on.

How well Golding lays out the floor plan in a memorable fashion, and not only hands us a humorous kind of outline, but does so with grace and style. This helps organize the placement of unfamiliar words used to describe the many sections of an official cathedral:


He stopped laughing and wiped his eyes. He took the white spire and jammed it firmly in the square hole cut in the old model of the cathedral.

The model was like a man lying on his back. The nave was his legs placed together, the transepts on either side were his arms outspread. The choir was his body; and the Lady Chapel, where now the services would be held, was his head. And now also, springing, projecting, bursting, erupting from the heart of the building, there was its crown and majesty, the new spire (4).

Those specific details root us in place. Set the scene. From there, Golding's protagonist can swing high or low, through bouts of sanity and clarity, as far as he likes, and the reader should still feel comfortable to go with him because of the specificity of place. Even if that place is built up of unfamiliar words. We know the general layout.

The cathedral becomes a madhouse as the 'army' of workers construct ladders upon ladders, build scaffolding, hang ropes like vines, and crumble the rock flooring and deconstruct sections of the roof. All the while, Dean Jocelin buzzes around, making enemies, irritating the master builder, and forcing his vision forward despite the great chance that the entire church will collapse.

Again, the detail to space is one of Golding's overlooked aspects. As the spire is built in sections,
rock by rock, the master builder tells the dean that he is fighting a losing battle. The spire has to be strong enough to not topple in the wind and rain storms, yet if he fortifies it too much, the pillars will surely bend and crumble.

Soon after, the pillars being to "sing". The rocks, the stained glass windows, bearing so much weight, and under that pressure, a whining, singing sound strains the ears of all around. The spire is looking to become what most have already been calling it -- Jocelin's Folly.

The master builder frequently begs Dean Jocelin to call it off, but Jocelin reminds him that he is the most skillful builder in all the land, and he punishes the builder's ego by asking him if he's afraid to dare big. To have big dreams. Nobody accomplishes master feats without faith. According to the dean. In a stroke of brilliance, Jocelin keeps the builder on the job past the point of being able to contract any other jobs in the area, effectively netting him to the calamitous project.

Jocelin visits the spire often. He crawls around the scaffolding, and from way up he peers across the countryside and watches the peasants hauling their goods across the bridge.

The dean thinks of the spire as the Great Finger rising over all the land, to be seen by men for miles and miles, calling them to the Church, and yet, most people outside of the dean's innocent call to faith might see it as another kind of stiff, protruding male member.

Golding is a master builder himself, as he describes the haunting sway of the spire, hundreds of feet in the air, as the dean hangs onto it:


The boys of the songschool had left their game on the sill of the arcade again. He could not see the squares of the board scratched in stone, but he could see the white, bone counters of the game that lay on it. He could see some of them; but only some, for the stone between the battlements cut off a corner of the board from his eye. There was a kind of childish security in looking at the game, the white counters, one, two, three, four, five--

His cheek was hard against the pinnacle and he knew he had not moved. But a sixth counter had appeared, had slid into view with another square of board under it. He knew he had not moved; but he knew that the tower had moved, gently, soundlessly up here, though down there the pillars might have cried--eeee--at the movement. Time after time, he watched the white counter slide into view, then disappear again; and he knew that the tower was swaying under him like a tall tree (128).

Many readers find The Spire challenging, complicated, yet most say it's one of the most interesting novels they've read. Golding's firmness of place and time contributes to anchoring what is a very complex novel of boundless faith and emotion. As Dean Jocelin wrestles with his angels and demons toward the end of the novel, he thinks to himself, "I traded a stone hammer for four people (214)."

Enjoy Golding's language -- specific to the cathedral, and to the era of the fourteenth century or so. Take note of his heavy verbs, like exploding, smashing, exalting, and jammed, the plunges into stream of consciousness, and the important inch-by-inch mechanical, structural details when delicate space is a matter of faith versus materials, and life and death.